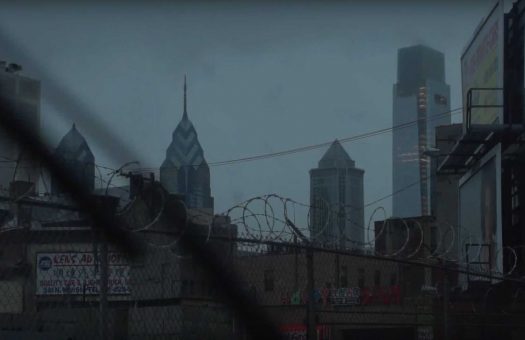 David Goodis remains the enigmatic mysterious semi-famous pulp noir fiction writer active in Mid-Twentieth Century America. Retracing the footsteps of the “poet of the losers”, we get a sympathetic feel for the themes and undercurrents found in his writings. “When you read him, you become him.”

“He wrote of winos and bar-room piano players and small-time thieves in a vein of tortured lyricism all his own, whose very excesses seemed uniquely appropriate to the subject matter. As his titles announce–Street of the Lost, Street of No Return, The Wounded and the Slain, Down There (the original title of Shoot the Piano Player)–he was a poet of the losers, transforming swift cut-rate melodramas into traumatic visions of failed lives.”—-Geoffrey O’Brien, critic

So began the writing career of David Goodis. Typical Goodis. A statement of frustration, introducing a tale of gloom, depression and despair. Noir at its blackest.

David Goodis was Philadelphia’s noir prince. After graduating from Temple University in 1938, Goodis moved to New York where he wrote advertising copy, radio scripts and thousands of words for pulp magazines. In the mid-1940’s he was in Hollywood as a screenwriter. He crashed and returned to his parents’ home in Philadelphia, where he churned out novels and short stories, depicting the bleakness and darkness of lives in free fall.

Who was David Goodis and why did he write as he did?

Andrew Kevorkian, friend of David Goodis, dies at 90. Click to photo tribute by Lou Boxer. For more information click to Funeral and Beyond.

Counterfactual on the Lost Works of David Goodis

Stuart Mitchner: On the Streets of Philadelphia — Discovering the Noir Universe of David Goodis

We know Goodis was obsessed, apparently, with the down-scale. His solitary trips to the “slum” areas at night, especially bars, are almost as legendary as his motives were unclear, despite the evidence of his sexual needs. But he loved teasing middle class friends with his exchanges of the fancy for the common. Garnier tells of how he celebrated his payment ($25,000) for the Saturday Evening Post serialization of Dark Passage. He took his buddy Monroe Schwartz to a fancy NYC restaurant, When the entree arrived, he placed it on the floor. Then he and Monroe went to a Nedick’s stand for a hot dog and orange juice. “That was a night on the town with Dave.”

“Shoot the Piano Player” also called “Down There” translated into Finnish as “Melody of Murder.”

Goodis Fever has reached the Arctic Circle. Finnish crime writer and Goodishead Tapani Bagge is writing an article on David Goodis, the Garnier book and the Withers documentary for Ruumiin kultuuri, the magazine of the Finnish Whodunnit Society.

“Every character [of a Goodis] book is suffering profoundly. The main character can do nothing about it,” said Geoffrey O’Brien, Editor-in-Chief of Library of America. “The 1950’s drove Goodis to such relentless self-analysis.”

Library of America has released Goodis, Five Noir Novels of the 1940s and 1950sedited by Robert Polito, director of Writing Programs at The New School.

This volume contains five Goodis classics: Dark Passage, Nightfall, The Moon in the Gutter, The Burglar and The Street of No Return. Tour the noir geography of David Goodis as he writes about San Francisco, Manhattan, the American West, Philadelphia’s docks, working class Philadelphia, working class Atlantic City and Philadelphia’s tenderloin.

The volume is a study in Goodis’ deepening inner torment.Dark Passage andNightfall were written before Goodis returned to Philadelphia after an unhappy stint as a Hollywood writer and a failed marriage. The Moon in the Gutter, The Burglarand The Street of No Return were written in a second floor bedroom in Goodis’ parents’ home on North 11th Street. These three Philadelphia novels are progressively gloomy. The characters are progressively hopeless. As Goodis advances in his career, his books address deeper and deeper psychological themes.

Polito includes a detailed chronology of Goodis’ life, from his parents’ occupations and residences, through Goodis’ education, his publications, his disastrous marriage, his hushed romance, his brilliant descent into paperbacks, and his demise. Polito provides notes explaining the contemporary cultural references in the five novels.

I won’t tell you about the plots. Get the book.

On April 19, 2012 Goodisheads gathered at the Free Library of Philadelphia to celebrate the release of the Goodis anthology. Editor Robert Polito proclaimed, “It’s great to be in Goodisville or Goodis Country. How similar things are as when Goodis wrote his novels and how different they are.” NoirCON founder Louis Boxer discussed the life of David Goodis. Robert Polito and Geoffrey O’Brien read from Goodis novels. They completed the evening with a panel discussion.

Brian Greene interviews
Larry Withers on “To A Pulp.”

Brian Greene is a freelance writer from North Carolina. He writes regularly for Shindig! music magazine from
the UK, and he is working on a biography of the late British crime writer/cult figure, Ted Lewis.

David Goodis, the man, the legend, the great noir writer

No description. Please update your profile.

Should you ever have a question, please dont hesitate to send a message or reach out on our social media.
MORE VIDEO