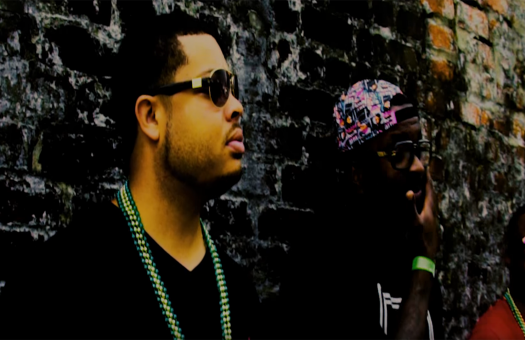 PAPER CUTZ: We shot on Bourbon and at St Louis Cemetery #2 to get the big chill vibes rolling

Perhaps more so than any other industry, rap is populated by those who beat all odds and climbed the ladder to wild success. People who dug in, worked hard, and made a name for themselves doing what they loved, despite the obstacles in their path. People who didn’t give up despite significant adversity, who remained loyal to their friends, and to their dreams.

Here are eight rappers who literally “started from the bottom” and are now astounding us with their accomplishments:

Tupac was one of the most influential rappers of all time, but he didn’t have an easy start. As a child, Tupac moved back and forth between Brooklyn and the Bronx, and often lived among politically radical activists. He also witnessed his mother’s struggles with substance abuse.

Tupac later moved to Baltimore, where he started taking acting and dance classes. Then, he discovered rap.

Tupac’s tragic death in 1996 sealed his iconic status, and today he is considered one of the most influential rappers in the history of the genre. He’s proof that hard work  — and pure, unremitting talent — will get you far.

The Notorious B.I.G.’s “Sky’s The Limit”

Biggie Smalls grew up in Clinton Hill, a then-derelict neighborhood in Brooklyn, before he moved to the West Coast. His mother, a preschool teacher, raised him on her own after his father left when he was two.

Biggie was a good student, but things weren’t easy in his neighborhood, and he dropped out of high school at age 17. He made his first demos in his basement, and began performing on the streets. Long days working on his rhymes led him to become one of the top players in the industry, alongside Tupac. The two were coastal rivals, and rap gods.

Now, almost 20 years after his death, The Notorious B.I.G.’s legacy lives on.

Born in Queens, New York, Nas was raised in a huge housing project. He dropped out in the eighth grade, and instead channeled his natural born talent into rap, writing music about growing up on the tough streets of New York City in the ’80s.

Nas recently released “Shake The Dust,” a powerful documentary that captures the performances and cultures of breakdancers living in slums around the world. The rapper-turned-executive producer has clearly come a long way, and he hasn’t stopped advocating for those still working to make their mark.

Nicki is the leading woman in rap right now, her talent on proud display in her infectious beats and quick rhymes. The Trinidad and Tobago native’s refusal to shy away from bold topics has helped her star rise to the top of a male-dominated industry.

Raised by a struggling father and often bullied in school, Nicki’s talent later caught the attention of Lil Wayne. Today, she is one of the highest-paid female artists, and Billboard 100’s top-charting female artist ever.

“I never want to go back to being poor,” she said in an interview with ContactMusic. “Once you have a taste of that you will always be driven. I know what that felt like and I don’t want to feel it ever again. So, yeah, I mean my childhood was crazy but it got me to the point where I had so much faith in whatever I was doing. I just always feel where there’s a will there’s a way and I live my entire life that way now.”

Aubrey Drake Graham first caught our attention as the wheelchair-bound Jimmy Brooks in Degrassi as a 15-year-old teenager. But he had a tough childhood — his mother took on a large amount of debt to move them to a better neighborhoodin Toronto to live in a basement. “Being bi-racial was tougher in Forest Hill than in the west end of the city,” Drake said. “But I made friends as I could. I had a tough time, I definitely had a tough time.”

Today, Drake has won a multitude of awards and his music consistently tops charts. He’s written hits for other artists including Alicia Keys and Rita Ora, and even voiced the mammoth Ethan in Ice Age: Continental Drift. Drake said it best in Started From The Bottom.

A native of the dangerous neighborhood of Compton, California, Kendrick Lamar was surrounded by poverty, drugs and gang violence from a young age. But he managed to stay away from the crime in his neighborhood, as he detailed in his song Sing About Me.

Today, Lamar is one of the most exciting rappers that has surfaced in recent years. In 2014, he was nominated for seven Grammys. He definitely made all of his friends and family back in Compton proud.

Raised in Hollygrove, New Orleans, Lil Wayne was born when his mother, a cook, was 19. His parents divorced when he was two and his father left the family, but Wayne eventually developed a close father-son relationship with rapper Birdman.

Lil Wayne’s talent was evident from when he wrote his first rap song at eight. Rapper and owner of Cash Money Records Bryan Williams later took Wayne on as a protegé. A star student at McMain Magnet School, he dropped out at 14 to pursue what would later turn out to be a highly successful career in music, winning multiple awards and number-one singles, as well as surpassing Elvis Presley as the male with the most entries on the Billboard Hot 100 chart.

Young Jeezy has been vocal about his rough upbringing, but using the money he earned from hustling, the entrepreneur-at-heart started a recording studio. Increasibly, he was the boss of a label before he was ever signed to one.

P. Diddy’s Bad Boy Records caught wind of his music, and quickly added him to the roster. One thing led to another, and today he’s a successful rapper who frequently collaborates with his hip hop artist friends like Rihanna and Usher.

Jay Z is one of the biggest hip hop icons alive. His music is considered some of the most groundbreaking in the genre, he is a successful entrepreneur and investor, and he’s married to Queen Bey. But Jay Z wasn’t always the business/hip hop magnate he is today. Born Shawn Carter, he was raised in the notorious Marcy Projects in the Bedford-Stuyvesant neighborhood of Brooklyn. Anecdotes from his childhood there feature heavily in his lyrics, and speak to the experience of so many others. Today, he is one of the most financially successful stars in hip hop, and one of the best-selling artists of all time. He has sold more than 100 million records worldwide and won 21 Grammy awards.

Before he became Fiddy, Curtis Jackson was born in South Jamaica, Queens, in New York City. His mother was murdered when he was eight.

After a series of stops and starts, the rapper obtained his GED. He later named himself “50 Cent” after a Brooklyn robber from the ’80s of the same name. In 2000, he was shot nine times at close range — and survived.

No description. Please update your profile.

Should you ever have a question, please dont hesitate to send a message or reach out on our social media.
MORE VIDEO